Before leaving Gloucester, we took the dogs and went on a day trip.  First we stopped at a memorial to the Yorktown Battle field. 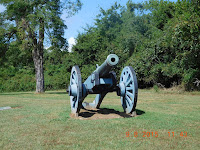 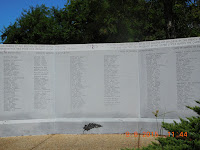 Then, on the way to Williamsburg, we saw these marvelous ships. 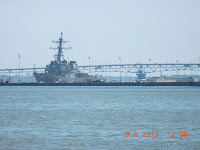 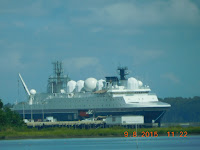 This is at the Jamestown Victory Center. 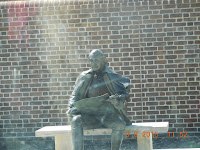 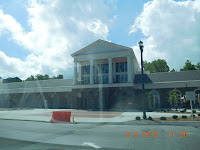 At first we drove through Colonial Williamsburg, after which we went to the Visitors Center. 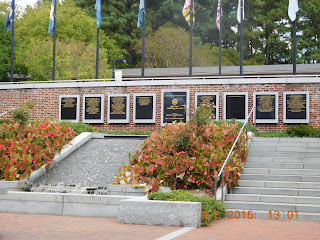 This was so pretty, that I decided to leave this picture large so you can see the details.  After a quick lunch in the Visitor's center cafe, we took the dogs on the tour tram over to the Colonial village. 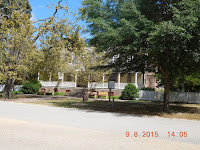 This is a quaint tavern in town.  It was across the street from the Presbyterian Meeting House. 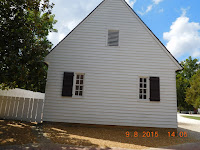 Then we walked through town, seeing some nice old houses. 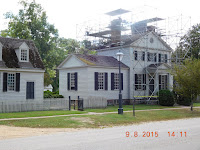 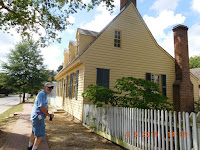 Later we walked over to see the Capitol Building. 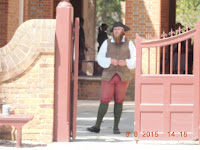 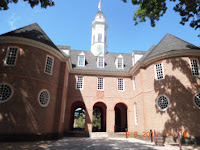 We continued down Duke of Gloucester Street.  ﻿It was a very hot and humid day, and we stopped to get more water for the dogs, at the Shield's Tavern.  As always, Millie was eager to make new friends along the way. 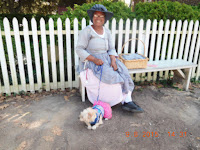 Unfortunately, shortly after that, we could see that, despite the extra water we gave her, Millie was beginning to show early signs of dehydration and heat exhaustion, so I carried her back to the tram stop at the corner of Queen and Francis Streets to catch our ride back to the Visitor's Center. 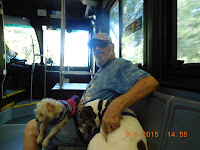 I gave her water several times (small amounts every fifteen minutes) until she felt better.  This was on the trip back on the tram.
After we got home, she napped the rest of the afternoon.  She was fine, but we learned to be even more careful about taking the dogs out in the heat.  None of us are used to this humidity here.
On Wednesday, we drove down to Historic Gloucester Courthouse.  These pictures below were taken there. 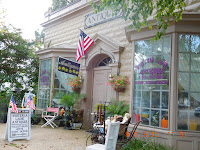 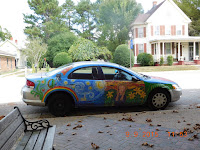 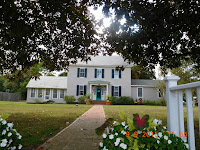 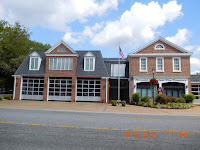 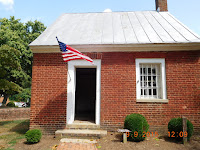 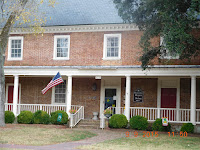 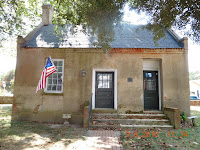 We really enjoyed our time in the Chesapeake Bay area.  On Thursday we packed up and drove west to the Thousand Trails Preserve near Lynchburg.  Friday morning we took the dogs to Seven Hills Animal Hospital, in Forest, to get their second Lyme Disease vaccination.  Tomorrow we will do some more local sight seeing before we leave here.
Stay well, keep cool, and enjoy America.  It's the greatest place in the world to live.  God bless all of you.
Posted by Jim & Sue at 1:38 PM