I'm sorry I didn't get to post this sooner, but we were too busy having a wonderful time being tourists in Mayberry.  We stayed 4 nights in the Mayberry Campground.  It is beautiful, one of the nicest we have seen. 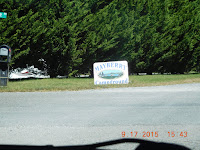 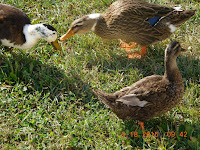 The two pictures above are at the campground.  The geese came right up to our door. 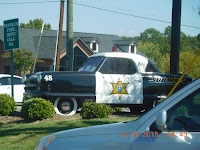 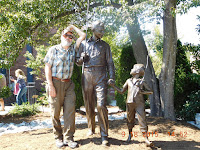 We saw this cute car downtown.  On the right is Jim next to the statue in front of the Andy Griffith Museum.   Inside I took the next picture in the lobby, Jim getting a kiss from "Thelma Lou."  The next picture is Betty Lynn (Thelma Lou) signing a picture of her with Andy & Barney Fife.  She is 89 years YOUNG, and still very delightful. 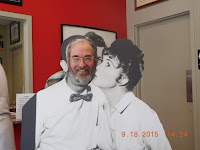 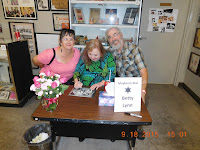 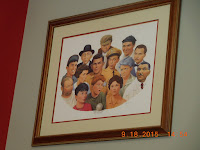 This beautiful picture was at the Museum, in the lobby.  We were not permitted to take any pictures in the museum itself.
The next day we took the tour of Mayberry in a replica squad car.  It was fantastic, and educational too.  We caught our ride at Wally's. 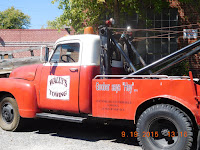 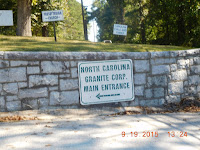 The first stop was to see the North Carolina Granite Corporation, which is huge.  The church below, and many homes were built entirely from the local granite. 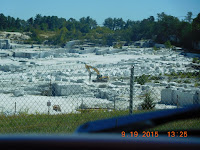 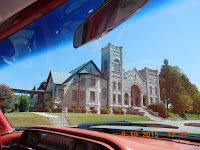 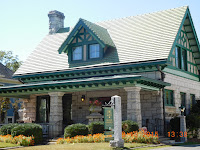 Jonathan drove us up Donna Fargo Road, named of course after the country singer.  Later we drove by the home Andy Griffith grew up in. 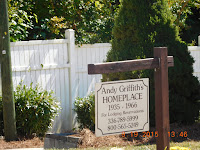 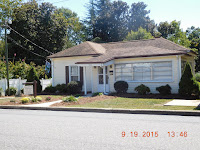 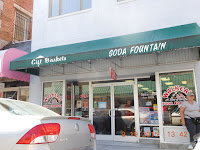 The Walker Soda Fountain was originally the Lamm's Pharmacy, where Andy worked after school and the fountain area is the original from back when he was there. 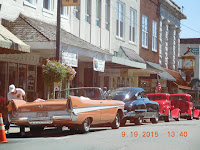 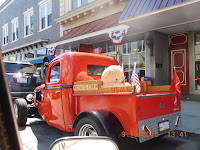 Several people brought their older cars to town that day! 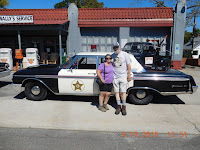 
Here we are after the tour of the town.
Then we went inside the Mayberry Courthouse/jail. 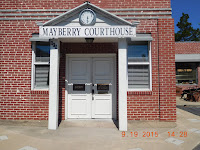 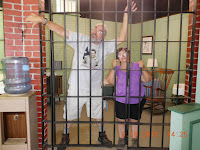 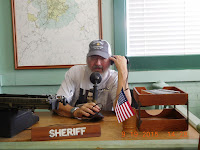 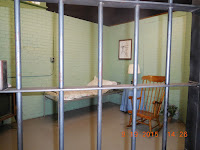 We had fun here......locked up and Jim couldn't reach the keys.  The last picture above is a replica of the cell Otis used to spend the night in, then leave in the morning.  Sheriff Jim had fun using the old style phone too. 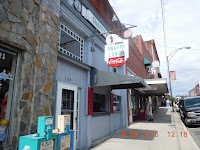 This is Snappy Lunch, where the folks on the TV show often dropped in for a bite after seeing a movie, and this is Floyd's Barber shop....two chairs, no waiting. 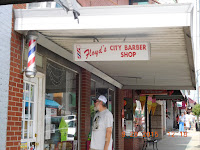 The next day we had lunch at Walker's Soda Fountain, and later got ice cream at Opie's candy Store. 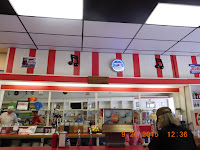 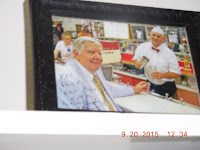 Even Andy came back here sometimes.  The Moon Pie and RC Cola were listed as the biggest lunch in town.....with a note that "It's a Southern Thing". 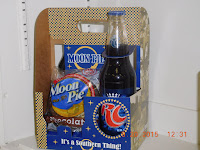 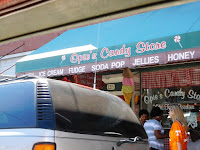 ﻿
Here's Opie's Candy Store.....it was small and crowded inside, but oh the delightful smells of chocolates, and pralines.  Oh my! God treated us to an awesome sunset our last night in North Carolina.  We can't decide if it's more beaituful in Virginia, or in North Carolina.............but both are incredible.  If you haven't been here, you should consider it, and autumn is definitely the time to be here.  The temperature is mild, and the scenery is unbelievable.  As I've said many times before, God IS the greatest artist of all time!
We spent last night at the Elks Lodge in Gastonia, NC.  It was very nice, and as always, the folks were very pleasant.  Today we drove south to the Thousand Trails Preserve called Carolina Landing in Fair Play, SC.  I have to say that this has to be the worst of all the parks we have ever stayed at.  We booked it for two nights, but we are moving to a KOA Park in Anderson first thing tomorrow morning.  We cannot get level in the site.  They assigned us one site that was just terrible!  There was a deep hole on the left side that our back tire dropped into, and we were afraid the Rv was going to fall over!!!!!  With prayers and almost too much acceleration, Jim managed to get out of the hole and into the site............but leveling was NOT possible.  We looked at three other sites, and finally moved to one we hoped would suffice for our two nights.  It's still not possible to get level.  I feel like a drunken sailor when I walk to the back bedroom.  We had to use a pry bar to open the bathroom door, and don't dare close it tonight.  Even Millie was walking funny when she jumped off the couch.  Please note:  Mayberry Campground in Mt. Airy, NC was the BEST park of the trip, and this one has to be the Worst!!!!!
Stay well, and keep the rubber side down.  On Thursday we will be going to an Elks lodge in Atlanta, GA for two days, and we plan to drive over to Grayson to visit my sister Joan, whom we have not seen since about 1982.  WOW.  We also want to go see Stone Mountain.  Hopefully I will find time to post again after that.