Hi Everyone,
We arrived here on Tuesday, and found a wonderful site.  We have one of the sites that offer 50 amp power at no extra cost.  YAY!  We got settled in and walked the dogs.  They like the soft grass around the sites.  This park is very pretty, and has much to offer, a swimming pool, spa, mini golf, tennis/pickle ball court, family center AND an adult center, hiking trails, and more. 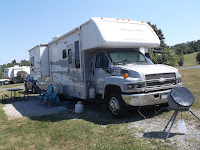 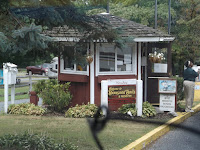 ﻿
Here is our site.The laundry room is within walking distance, so that's handy.

I sent an email, as I said I would, to the insurance adjuster, and her reply was most disappointing.  At this point they said the pictures we took and sent to her did not support the amount of damage and cost of same, that Camping World had stated, over $5000.00, and their offer for the repairs was only $975.00.  I wrote back and said we should not be penalized for my pictures and asked for an appraiser to come out and see for himself.  She said they don't do that.  However, if we got an updated estimate, with better pictures from the shop that would actually be doing the work, they would consider offering us more to cover the work to be done.  Long story short, we have found a shop in Duncannon, that has done business with our insurance company, and they would have the time to do the work when we are ready to leave here.  He said he can complete an estimate early this next week, and hopefully, it will be approved by the insurance company and we can get the work done before the end of this month.  YAY!  Please pray that this works out, as we want to head home, but cannot do so with the RV being held together with duct tape and a bungee cord!!!!!  As many of you know, Jim doesn't do "waiting" very well. He is impatient and wants the work done now, and fully covered by the insurance. Hopefully I won't have to sedate him to get though this......just kidding. I guess it's time to get Jim playing Mexican Train again. LOL.

If all goes as we hope it will, we would like to spend a few days at the Thousand Trails Preserve on Chesapeake Bay, then west to the one near Lynchburg, VA.  Then we would travel south and west to head back to Southern California.  We are reluctant to get back there too soon though, since wild fires are burning much of the landscape out there.
This past Wednesday we had a guy here to look at our front A/C, which hums but does not cool at all.  He has ordered us a new circuit board, and new shroud for the unit, and will do that and service our generator on Monday.  YAY!  Then we will be cool in the living area as well as in the bedroom, where our second A/C unit is working well and doing its best to keep the RV liveable.
We saw this at a store downtown in Campbelltown. 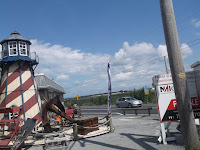 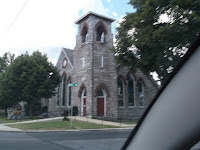 This church is the one we attended when we were here 5 years ago, and will be attending while we are here this time.
Yesterday we had an appointment and took both dogs to a local vet for the immunizations that they needed to keep them well.  Some people brought in a whole litter of young golden retriever pups, and Millie wanted to make their acquaintence.  I try to keep her away from other dogs at the vet because you never know if they are there for a well dog appointment or because they are sick.  She has had more than enough health concerns for this year, and I just can't risk her getting sick again.  On the recomendation of the vet, we got both dogs immunized against Lyme disease and canine influenza, since we never know what they could be exposed to when we travel.  After getting the shots, he informed us they would need a second shot of each in 3 weeks to be fully protected.  We don't even know for sure where we will be in 3 weeks, but will try to comply.
I forgot to add, yesterday before taking the dogs to the vet, I took Willie out on leash to go "potty".  While I was talking to Jim, Willie spotted a small Jack Russell terrier that was off leash, and took off after it.  I was not expecting that, but held on tight to his leash.  He ran, and I lost my footing and went down face first on the ground............still holding onto his leash!  Jim came rushing to my aid, as did two other men from the area.  I asked Jim to get Willie safely inside first, then the three guys helped me up.  Boy was I sore.  I have scrapes on both knees, and both elbows and a pretty sore chest from the impact on the ground.  Thank God I was able to stay on my feet until we got off the gravel.....the grass was a slightly better landing surface.  Always be thankful to our awesome God.   He IS watching over us. That fall could have been much worse than it was.
Well, I think that's all for today.  Keep the rubber side down, stay well and safe, and enjoy America.